As noted in C3 and C4, Datura, Ltd., sold 15,000 sets of pottery in 2014. For the next year, 2015, Daturaâ€™s strategic planning team targeted sales of 15,000 sets of pottery, reduced the selling price to â‚¬890 per set, increased sales commissions to 12 percent of the selling price, and decreased fixed distribution costs by 10 percent and variable distribution costs by 4 percent. It was assumed that all other costs would stay the same.

In Q C3, Based in Italy, Datura, Ltd., is an international importer-exporter of pottery with distribution centers in the United States, Europe, and Australia. The company was very successful in its early years, but its profitability has since declined. As a member of a management team selected to gather information for Daturaâ€™s next strategic planning meeting, you have been asked to review its most recent contribution margin income statement for the year ended December 31, 2014, which follows. 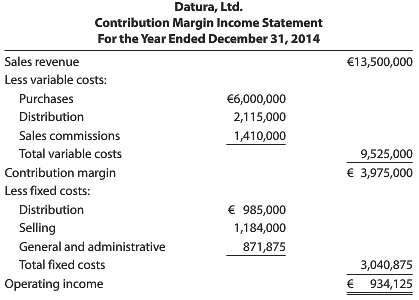 In Q C4, Refer to the information in C3. In January 2015, the president of Datura, Ltd., conducted a strategic planning meeting. During the meeting, the vice president of distribution noted that because of a new contract with an international shipping line, the companyâ€™s fixed distribution costs for 2015 would be reduced by 10 percent and its variable distribution costs by 4 percent. The vice president of sales offered the following information:
We plan to sell 15,000 sets of pottery again in 2015, but based on review of the competition, we are going to lower the selling price to â‚¬890 per set. To encourage increased sales, we will raise sales commissions to 12 percent of the selling price.
The president is concerned that the changes described by the vice presidents may not improve operating income sufficiently in 2015. If operating income does not increase by at least 10 percent, she will want to find other ways to reduce the companyâ€™s costs. She asks you to evaluate the situation in a written report. Because it is already January 2015 and changes need to be made quickly, she requests your report within five days.

Based on an analysis of these changes, Daturaâ€™s president is concerned that the proposed strategic plan will not meet her goal of increasing Daturaâ€™s operating income by 10 percent over last yearâ€™s income and that the operating income will be less than last yearâ€™s income. She has come to you for spreadsheet analysis of the proposed strategic plan and for analysis of a special order she just received from an Australian distributor for 4,500 sets of pottery. The orderâ€™s selling price, variable purchases cost per unit, sales commission, and total fixed costs will be the same as for the rest of the business, but the variable distribution costs will be â‚¬160 per unit.
Using a spreadsheet, complete the following tasks:
1. Calculate the targeted operating income for 2015 using just the proposed strategic plan. (Round to the nearest whole number.)
2. Prepare a budgeted contribution margin income statement for 2015 based on just the strategic plan. Do you agree with Daturaâ€™s president that the companyâ€™s projected operating income for 2015 will be less than the operating income for 2014?
Explain your answer.
3. Calculate the total contribution margin from the Australian sales.
4. Prepare a revised budgeted contribution margin income statement for 2015 that includes the Australian order. (Hint: Combine the information from 2 and 3 above.)
5. Does Datura need the Australian sales to achieve its targeted operating income for2015?

Q:
Based in Italy Datura Ltd is an international importerexporter of pottery with
Q:
You have been asked to review the December 31, 2011, balance sheet
Q:
College campuses are graying! According to a recent article, one in four
Q:
Explain how you would estimate the temperature rise in the shear zone
Q:
The variable names references an integer array with 20 elements. Write a
Q:
1. What application development methods will you use? Explain your answer. What

Q:
Consider the strengths and weaknesses of purposeful, convenience, and random sampling approaches
Q:
In a study of methods of producing sheep\'s milk for use in
Q:
Refer to the information in C3. In January 2015, the president of
Q:
What is a master budget and what are the guidelines that enhance
Q:
On May 31, the following data were accumulated to assist the accountant