Jerry’s Seafood is a chain of restaurants located across Maryland. They serve all kinds of seafood including crab-made dishes. Maryland is a famous place for crab fishing which is advantageous to Jerry’s Seafood restaurants due to their proximity to the natural habitat of crabs. Since Jerry’s Seafood restaurants are very famous with high sales level, they hire fishers during the crabbing season to directly supply the restaurants. Crabbing season is approximately 8 consecutive months followed by an approximately 4- month off-season. During the off-season, crabbing is not allowed due to environmental protection laws and weather-related reasons. During the open season, crabs are moved directly to the restaurants on a daily basis to use them fresh. The proximity of restaurants to the ocean made this process extremely efficient during the open season.

The problem with this form of supply begins when the crabbing season ends. To supply the restaurants during the off-season, an inventory of crabs – The Crab Stock – has to be made prior to the off-season and has to last for the entire off-season. Every year it seems there are extended and heated discussions of how big The Crab Stock should be. Matt, the sales manager of the Jerry’s Seafood chain, is sitting thinking through what his position would be at tomorrow’s meeting when this would again be the topic of discussion.

Matt is holding this year’s meeting in his office at the administrative building. The other participants are Jim, the inventory manager, and Jacqueline, the treasurer. Each participant has the information provided in Table 1. This indicates the size of The Crab Stock at the beginning of the off-season in each of the last six years and the size of the stock, if any, at the end of the off-season.

I am sure you both remember the terrible problem we had in 2001 when we exhausted The Crab Stock and had to outsource locally to keep the restaurants servings crab dishes. The same factors which caused us to run out- high demand and a long freeze, affected a number of restaurants the same way. With that demand our outside suppliers were able to charge us an effective price of about twice what it costs to fish and transport from the ocean. The point is this, the increased cost of outsourced crabs wiped out all of the profit contribution that year. I hope we can all agree at the outset that we will build The Stock big enough this year that we won’t have the repetition of that mess.

Jim looks at Matt and says:

We all understand the problem and in fact sympathize with you on it Matt, but remember there is another side to this story too. Two thousand one was really bad luck. Not only we pick up much more business than we had forecast but it was a significantly longer off-season period. It is not likely we’ll run in into that situation again. It is certainly not logical to do all of our planning to protect against every extreme contingency. Don’t forget that The Crab Stock really costs big money and we’re not the old Cash Cow we used to be.

Matt continues: I’m not quite sure what you’re driving at Jim, surely the costs of stocking an adequate amount of crab are very small. After all, we will use any leftover during the following crabbing season.

Jim broke in and said: That is not really the point Matt. If we have too much crab stocked, it means we have paid the fishers to fish about 4 months earlier than we needed to. It may not sound a big deal to you but our internal cost of funds (holding cost factor) is 25% per year, so tying up money in The Crab Stock gets expensive. Jacqueline, could you please what kind of fishing costs are we looking at now?

Matt adds: The thing that bothers me is that how much crab I will need in The Crab Stock depends not only on my consumption rate but on how long the off-season will last. When I looked back in our files, I was able to piece together the length of off-season in each of the past 10 years (Table 2). Jim, it’s all very well for you to come here and talk about internal cost of funds but come back later when we are out of crab and we need to pay $70 per hundred-pound (delivered to restaurants) to outside crab suppliers during the off-season. And that will be real dollars not funny money. 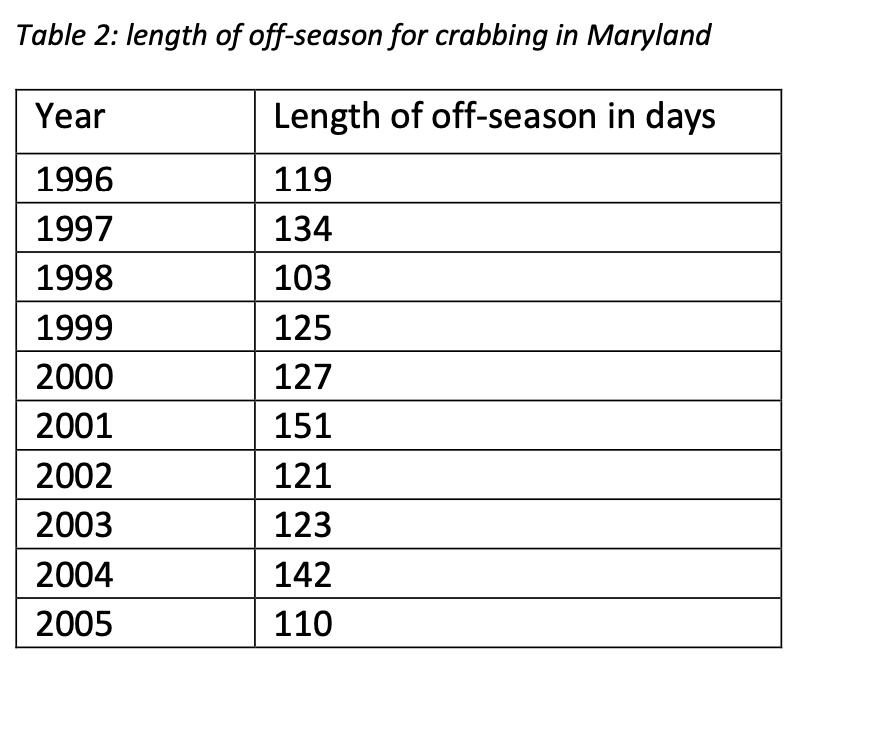 This case study deals with the newsvendor problem.
The key question is: How much crab should be piled up before the off-season? To answer this question you will need the following information:

Once you have the information, use the formula provided in the previous session and compute the optimal pile size.

No answer yet for this question.

Ask a Tutor
Related Book For

Q:
High Fashion Ltd. is a chain of high- end retailers of women\'s
Q:
The Hi-Style Company is a chain of beauty salons in San Diego,
Q:
A crystalline solid consists of atoms stacked up in a repeating lattice
Q:
On January 1, 2013, Byner Company purchased a used tractor. Byner paid
Q:
Recall that a simple random sample of 36 new mobile homes yielded
Q:
The trial balance of Arlington Air Purification System, Inc., at December 31,
Q:
PrimeTime Sportswear is a custom imprinter that began operations six months ago.
Q:
Reimaginez is an award-winning company that specializes in designing, redesigning, and scaling
Previous Question
Next Question