OTE operates in a stable industry and the results for

OTE operates in a stable industry and the results for the company were relatively consistent over the past five years. The December 31 year-end statements are provided in Appendix I. There are a few outstanding accounting issues that may impact them, which I have included in Appendix II. I also put together a memo for you with some information on non-recurring or unusual items incurred by OTE. I will email it to you. Our weighted average capitalization rate is 12%. I want you to assume that the present value of the tax shield associated with capital reinvestment is about 10% of the amount spent, which is projected to be $100,000 per year. As FCI is public, it would not be able to claim a small business deduction for OTE. I would say that FCI could expect to pay corporate tax at the rate of 30%. 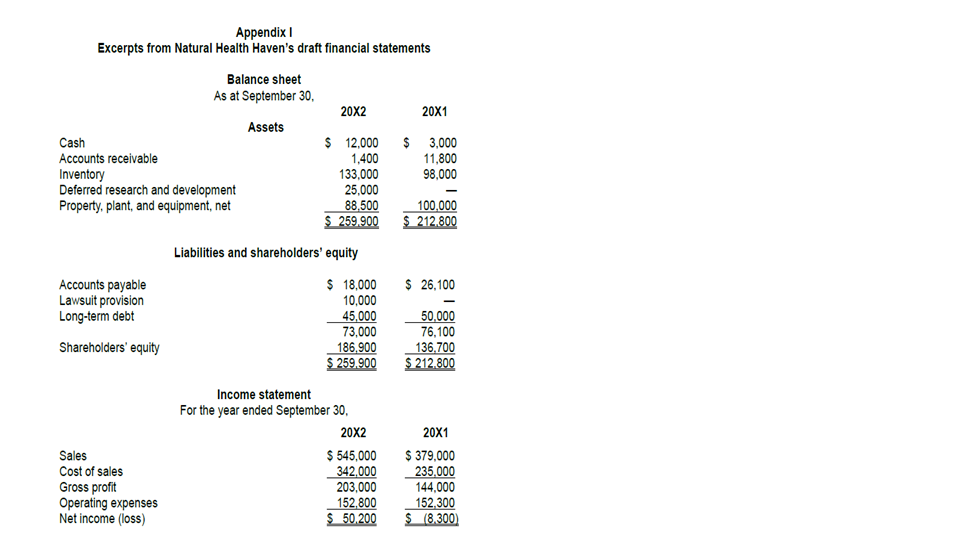 • Lilly did some research and believes that businesses such as NHH usually sell for three times normalized net income. Net income should be determined in accordance with the relevant accounting standards. NHH uses accounting standards for private enterprises (ASPE). Lilly’s research is based on similar businesses in the very health-conscious cities of Vancouver, Los Angeles, and Denver. The populations of these cities are significantly larger than Saskatoon.

• Consulting fees are estimated to bring in an additional $130,000 per year.

• The consulting service will generate additional sales because people will be in the store and in a healthy mindset. Kareem believes that this and other factors will increase product sales by 15% per year. Margins are expected to be approximately 42% of sales.

• Operating expenses will increase by about $35,000 per year. These increases will cover any additional consulting services and health store expenses.
Lilly earns $75,000 as an on-staff naturopathic doctor at the local hospital. Lilly’s husband stays at home with their three young children and will continue to do so. Therefore, she must maintain a reasonable salary to support her family. She enjoys working her standard hours of 8:30 a.m. to 4:30 p.m. and spending weekends and evenings with her family.

• Lilly is excited about the opportunity presented by Kareem, as she studied business during her undergraduate degree. She has always wondered what it would be like to own a small business. She likes the idea of being her own boss.

• Kareem has told her that it has been fun so far. He has been able to figure out all aspects of the business including the marketing and accounting for NHH. He is quite proud that he could prepare the draft financial statements entirely on his own.

Answer : 1)The amount of equipment recorded at the time of the purchase should be the balance by year-end. However, the amount of liability should be … View the full answer

Get help from Finance Tutors

Q:
A wholesale business with a December 31 year end purchased new equipment
Q:
Tropical North Company, which has a December 31 year end and uses
Q:
Do you think the ethics charges against District Attorney Mike Nifong are
Q:
Raveena is a resident of the Republic. She is 30 years old.
Q:
When the same name is used for two or more methods in
Q:
Arthur Meiners is the production manager of Wheel-Rite, a small producer of

Q:
QUESTION 3 Make the given substitution and work in much the same
Q:
A thick steel sheet of area 400 cm2 is exposed to air
Q:
Amway Company manufactures and distributes nutrition, beauty, personal care and home products.
Previous Question
Next Question