For the case study, answer the following questions. 5. Over time, should Unilever combine the more germs and faster kill claims into positioning Lifebuoy? 6. it is unlikely that competitors would let Unilever take market shares away from them in the liquid antibacterial handwash category. how can they fight Unilever? Lifebuoy/Unilever Asia Private Limited Superfast Handwash - rhree Lead Agency 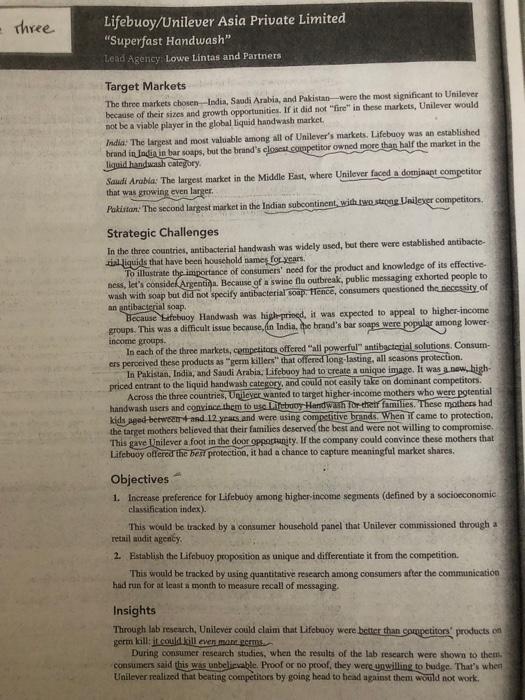 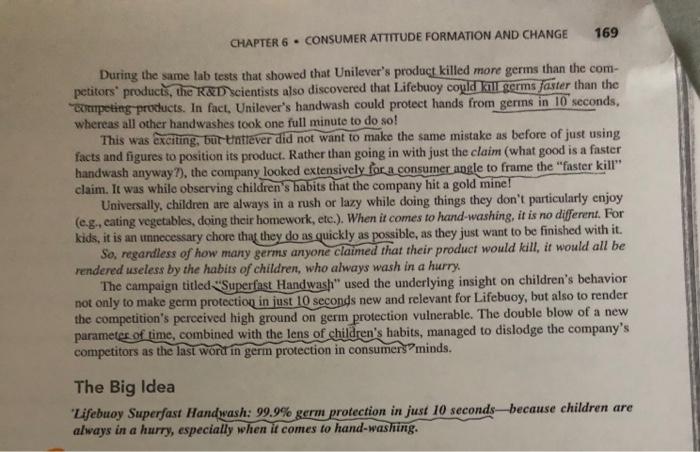 For the case study, answer the following questions.

5. Over time, should Unilever combine the "more germs" and "faster kill" claims into positioning Lifebuoy?

6. it is unlikely that competitors would let Unilever take market shares away from them in the liquid antibacterial handwash category. how can they fight Unilever?


Lifebuoy/Unilever Asia Private Limited "Superfast Handwash" - rhree Lead Agency Lowe Lintas and Partners Target Markets The three markets chosen-India, Saudi Arabia, and Pakistan-were the most significant to Unilever because of their sizes and growth opportunities. If it did not "fire" in these markets, Unilever would not be a viable player in the global liquid handwash market. India: The largest and most valuable among all of Unilever's markets. Lifebuoy was an established brand in ladia in bar soaps, but the brand's closcat coumpetitor owned more than half the market in the liguid handwash category. Saudi Arabla: The largest market in the Middle East, where Unilever faced a domjnant competitor that was growing even larger. Pakistan: The second largest market in the Indian subcontinent, with two stng Unilever competitors. Strategic Challenges In the three countries, antibacterial handwash was widely used, but there were established antibacte- zial Jiguids that have been household names for ears. To illustrate the importance of consumers' need for the product and knowledge of its effective- ness, let's considek Argentina. Because of a swine flu outbreak, public messaging exhorted people to wash with soap but did not specify antibacterial soap. Hence, consumers questioned the necessity of an antibacterial soap. Because Lifebuoy Handwash was high-prioed, it was expected to appeal to higher-income groups. This was a difficult issue because, in India, he brand's bar soaps were popalar among lower- income groups. In cach of the three markets, competitors offered "all powerful" antibacterial solutions. Consum- ers perceived these products as "germ killers" that offered long-lasting, all seasons protection. In Pakistan, India, and Saudi Arabia. Lifebuoy had to create a unique image. It was anew, high- priced entrant to the liquid handwash category, and could not casily take on dominant competitors. Across the three countries, Unileyer wanted to target higher-income mothers who were potential handwash users and convince them to usa Litebuoy Handwash for-teir families. These mothers had kids aged-betwentand.12.years.and were using competitive brands, When if came to protection, the target mothers believed that their families deserved the best and were not willing to compromise. This gave Unilever a foot in the door opportunity. If the company could convince these mothers that Lifebuoy offeredrthe best protection, it had a chance to capture meaningful market shares. Objectives 1. Increase preference for Lifebuóy among higher-income segments (defined by a socioeconomic classification index). This would be tracked by a consumer household panel that Unilever commissioned through a retail aodit agency. 2. Establish the Lifebuoy proposition as unique and differentiate it from the competition. This would be tracked by using quantitative research among consumers after the communication had run for at lecast a month to measure recall of messaging. Insights Through lab research, Unilever could claim that Lifebuoy were better than competitors' products on germ kill: it.couuld.kill even manegerms During consumer research studies, when the results of the lab rescarch were shown to them consumers said this was unbelievable. Proof or no proof, they were upwilling to budge. That's when Unilever realized that beating competitors by going head to head against them would not work.

5. Yes it should combine more germs and faster kill. This will enhance its chances to defeat its com… View the full answer