TipTop Flight School offers flying lessons at a small municipal airport. The school’s owner and manager has been attempting to evaluate performance and control costs using a variance report that compares the planning budget to actual results. A recent variance report appears below: 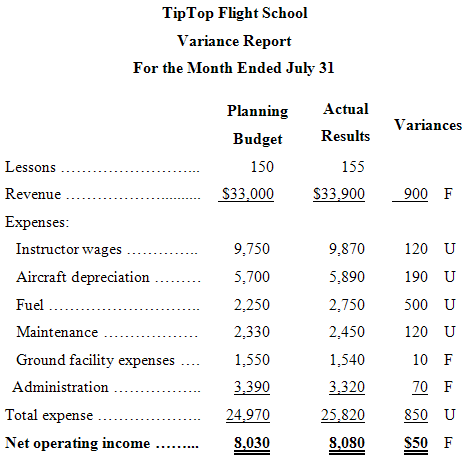 After several months of using such variance reports, the owner has become frustrated. For example, she is quite confident that instructor wages were very tightly controlled in July, but the report shows an unfavorable variance.

The planning budget was developed using the following formulas, where q is the number of lessons sold: 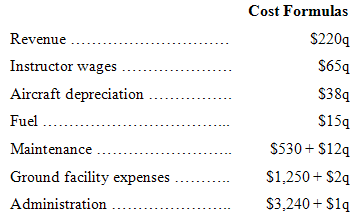 1.         Should the owner feel frustrated with the variance reports? Explain.

2.         Prepare a flexible budget performance report for the school for July.

1. The variance report should not be used to evaluate how well costs were controlled. In July, the planning budget was based on 150 lessons, but the a…View the full answer

Solution for problems in chapter 10

Q:
Wings Flight School offers flying lessons at a small municipal airport. The
Q:
After several months of planning, Magda Durocher & Martin Paquette started a
Q:
The data from Exercise 16.72 on the survival times, in days, among
Q:
A study by Fidelity Investment found that in a recent year, 40%
Q:
FtsZ proteins direct the formation of a ________ that will eventually form
Q:
In April 2007, Stark, Ltd., applied for credit and opened an account

Q:
What is the new sematic elements in HTML5? i. ii. iii. iv.
Q:
Create a star schema for this case study. How did you handle
Q:
Packaging Solutions Corporation manufactures and sells a wide variety of packaging products.
Q:
The St. Lucia Blood Bank, a private charity partly supported by government
Q:
True or False The slope of a vertical line is zero. Justify