For 2012, Selene Company initiated a sales promotion campaign that included the expenditure of an additional $25,000 for advertising. At the end of the year, Scott Brown, the president, is presented with the following condensed comparative income statement: 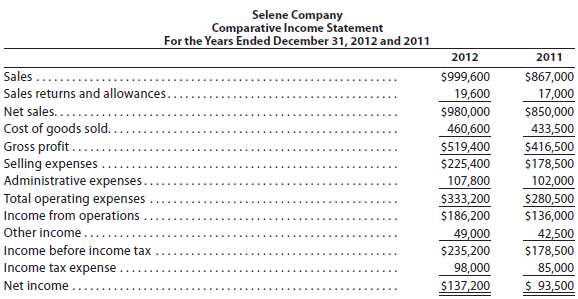 Instructions
1. Prepare a comparative income statement for the two-year period, presenting an analysis of each item in relationship to net sales for each of the years. Round to one decimal place.
2. To the extent the data permit, comment on the significant relationships revealed by the vertical analysis prepared in(1).

1. 2. The vertical analysis indicates that the costs other than selling expenses (cost o…View the full answer

Q:
(Note that the vertical and horizontal scales are not the same.) Find
Q:
There is a lottery with n coupons and n people take part
Q:
The following information was taken from the financial statements of Bailey Inc.
Q:
Data pertaining to the current position of Brin Company are as follows:
Q:
A toy company has assigned you to analyze the factors influencing the