The College Board provided comparisons of SAT scores based on the highest level of education attained by the test taker's parents. A research hypothesis was that students whose parents had attained a higher level of education would on average score higher on the SAT. The overall mean SAT math score is 515 (College Board website, November 15, 2009). SAT math 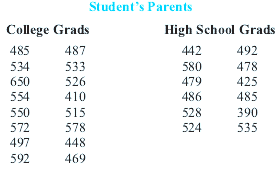 a. Formulate the hypotheses that can be used to determine whether the sample data support the hypothesis that students show a higher population mean math score on the SAT if their parents attained a higher level of education.
b. What is the point estimate of the difference between the means for the two populations?
c. Compute the p-value for the hypothesis test.
d. At Î± - .05, what is your conclusion?

Essentials Of Statistics For Business And Economics

Q:
The College Board provided comparisons of Scholastic Aptitude Test (SAT) scores based
Q:
The College Board SAT college entrance exam consists of three parts: math,
Q:
A record collector has agreed to sell her entire collection to a
Q:
For the wire figure of the problem indicated, determine the mass moment
Q:
Discuss this comment by the owner of a local car dealership: “Budgeting
Q:
Davis Industries must choose between a gas-powered and an electric-powered forklift truck
Q:
I need the answer as soon as possible
Q:
Suppose that a firm has borrowed $510,000 in the current year at
Q:
The National Quality Research Center at the University of Michigan provides a
Q:
How much is the cost of a hospital stay increasing? The mean
Q:
Is a state ban on the use of false routing information to