The DeBourgh Manufacturing Company was founded in 1909 as a

The DeBourgh Manufacturing Company was founded in 1909 as a metal-fabricating company in Minnesota by the four Berg brothers. In the 1980s, the company ran into hard times, as did the rest of the metal-fabricating industry. Among the problems that DeBourgh faced were declining sales, deteriorating labor relations, and increasing costs. Labor unions had resisted cost-cutting measures. Losses were piling up in the heavy job-shop fabrication division, which was the largest of the company's three divisions. A division that made pedestrian steel bridges closed in 1990. The remaining company division, producer of All-American lockers, had to move to a lower-cost environment.

1. After its move in 1990 to La Junta, Colorado, and its new initiatives, the DeBourgh Manufacturing Company began an upward climb of record sales. Suppose the figures shown here are the DeBourgh monthly sales figures from January 2001 through December 2009 (in $1,000s). Are any trends evident in the data? Does DeBourgh have a seasonal component to its sales? Shown after the sales figures is Minitab output from a decomposition analysis of the sales figures using 12-month seasonality.

Next an Excel graph displays the data with a trend line. Examine the data, the output, and any additional analysis you feel is helpful, and write a short report on DeBourgh sales. 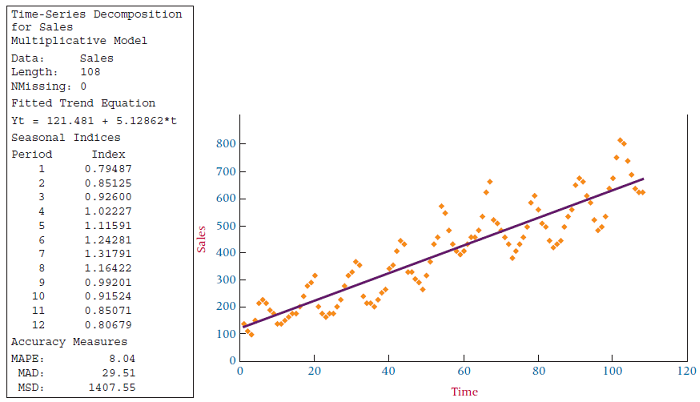 Include a discussion of the general direction of sales and any seasonal tendencies that might be occurring.

2. Suppose DeBourgh accountants computed a per-unit cost of lockers for each year since 1996, as reported here. Use techniques in this chapter to analyze the data. Forecast the per-unit labor costs through the year 2009. Use smoothing techniques, moving averages, trend analysis, and any others that seem appropriate. Calculate the error of the forecasts and determine which forecasting method seems to do the best job of minimizing error. Study the data and explain the behavior of the per-unit labor cost since 1996. 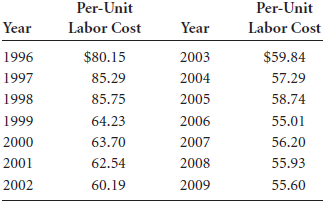 Think about the company history and objectives since 1996.

1. The decomposition analysis shows several things. A study of the original data shows that there is a general upward trend. This is underscored by th…View the full answer

Get help from Statistics Tutors

Q:
The Castle Cork Company was founded in 20X1 and had the following
Q:
H.J. Heinz Company was founded in 1869 at Sharpsburg, Pennsylvania, by Henry
Q:
Assuming that u is strictly concave, show that the optimal growth model
Q:
Write a Python program that outputs all possible strings formed by using
Q:
Foreign particles circulating in the blood are filtered by the ____________. a.
Q:
Jim Carrie Company shows a balance of $181,140 in the Accounts Receivable

Q:
You are considering a proposal to produce and market a new sluffing
Q:
Planning is one of the most important management functions in any business.
Q:
Shown below is output from two Excel regression analyses on the same
Q:
Use the forecast errors given here to compute MAD and MSE. Discuss
Q:
Draw a graph of the following points. What can you say about