The summarized statements for the year ended 31 December 2007

The following information is also available: 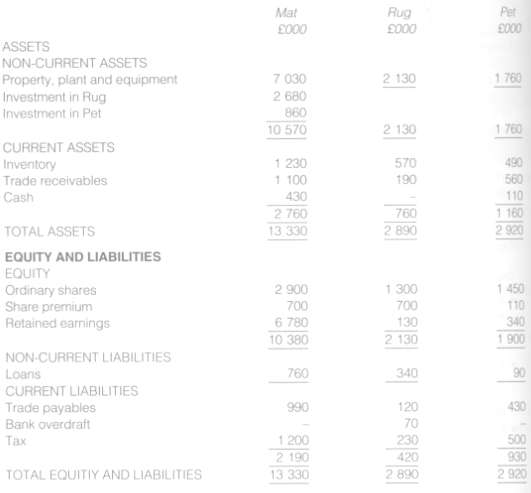 (i) Dividends paid out of earnings for the year 31 December 2007 were as follows: Mat £600 000, Rug £550 000, Pet £440 000. The appropriate shareholders have received all these dividends. Mat has included its share in 'Revenue' on the statement of comprehensive income.
(ii) Mat acquired an 80% share in Rug and a 60% share in Pet on 1 January 2007. The fair values of Rug's assets at that date equalled those shown on the statement of financial position. As at 1 January 2007 the fair value of Pet's property was £750 000 in excess of the statement of financial position value. Mat, Rug and Pet all depreciate their property, plant and equipment on the same basis. Property is depreciated on a straight line basis over 50 years.
(iii) As at 31 December 2007 the fair value of the consolidated goodwill in Rug was reviewed and found to have a value 10% less than its carrying value at the consolidation date. This impairment is to be accounted for in the consolidated accounts. Any negative goodwill is to be taken to the statement of comprehensive income.
(iv) Intergroup sales (Mat to Rug) in the period from 1 January 2007 to 31 December 2007 are £6 200 000 on which Mat made a profit of 15% on selling price. Of these goods £1 000 000 (at selling price from Mat to Rug) are still in Rug's closing inventory amount.
Required:
Prepare the consolidated statement of comprehensive income for the year ended 31 December 2007 and the consolidated statement of financial position as at that date for the group.

Goodwill
Goodwill is an important concept and terminology in accounting which means good reputation. The word goodwill is used at various places in accounting but it is recognized only at the time of a business combination. There are generally two types of...
Transcribed Image Text:

Dividend adjustments: Mat has included 80% * 550 + 60% * 440 on dividends from Rug and Pet in revenue = 704 Current years additions to retained earnin…View the full answer

Q:
The statement of financial position as at 31 December 20X2 of Zoom
Q:
Rumpus plc is a public listed manufacturing company. Its summarized consolidated financial......
Q:
You are a debt collections officer for a credit card issuer, NationalOne
Q:
Review the following chart of Hofstede’s cultural dimensions. Based on the chart,
Q:
Write an if statement that assigns 0.2 to commission if sales is
Q:
Green Forever provides environmentally friendly lawn services for homeowners. Its operating costs