You, CA, are employed at Beaulieu & Beauregard, Chartered Accountants.

You, CA, are employed at Beaulieu & Beauregard, Chartered Accountants. On November 20, 20X5, Domenic Jones, a partner in your firm, sent you the following email:
Our firm has been reappointed auditors of Floral Impressions Ltd. (FIL) for the year ending December 31, 20X5. I met with the president and major shareholder of FIL, Liz Holtby, and last week. I have prepared some background information on FIL for you to review, including the company€™s October 31, 20X5, internal non- consolidated financial statements (Exhibit D). FIL is increasing the amount of business it does on the internet, and Liz would like us to provide comments on the direction in which FIL is moving. I made notes on her plans for FIL€™s increasing use of the internet (Exhibit E). I also met with Craig Albertson, the controller, and I made notes from that meeting (Exhibit F).
Once you have reviewed the material, I would like you to draft an audit planning memo identifying the new accounting and audit issues for the 20X5 audit. I would also like the memo to address Liz€™s specific requests. I€™d like to receive something by next week. Let me know if you have any questions.

Required
Prepare the memo requested by the partner.
Exhibit D
Background Information
Floral Impressions Ltd. (FIL), a small public company listed on a Canadian stock exchange, is a wholesaler of silk plants with three warehouses located in Ontario, Alberta, and British Columbia. It imports its inventory of silk flowers and accessories from Indonesia. FIL employees arrange bouquets, trees, wreaths, and decorative floral products for sale in Canada to flower shops, grocery stores, and other retailers.
The silk plant concept was novel when FIL was incorporated in 19X4. For the first three fiscal years, sales grew at approximately 40% per year, and FIL expanded to meet the demand. However, increased competition resulted in declining sales and operating losses over the next six years. Liz inherited the shares of the company in 20X3. She had just completed a marketing course and was very excited about becoming involved in the business and applying her new skills. The fiscal year ended December 31, 20X4, brought a return to higher sales levels and a modest net income. Liz€™s management contract, which was negotiated in 20X4, provides for stock options to be granted to her each year based on the percentage increase of FIL€™s revenue from one year to the next. On October 31, 20X5, Liz was granted stock options for the first time. She received 4,500 stock options at $ 2.50 each, the market price at that date.
On January 15, 20X5, when shares were trading at $ 4 each, FIL announced an agreement with the share-holders of Rest- EZE Wreath Corporation (RWC) whereby FIL would acquire 100% of the voting shares of RWC by issuing 200,000 FIL common shares. The acquisition of RWC was completed on October 31, 20X5. The market value of FIL€™s shares has declined significantly since the announcement. RWC, a small private Canadian corporation, sells funeral wreaths, made with fresh flowers, on the internet. The suppliers, florists throughout Canada, advertise their wreath models on RWC€™s website, which is targeted at funeral homes and their customers. These clients order their flowers through RWC€™s website. RWC records 100% of the sales, invoices the client for the same amount, and remits 85% of the proceeds to the supplier. RWC absorbs any bad debts. RWC is in the process of installing a billing system on its website that would allow customers to pay by credit card, but is still working out some bugs. RWC€™s assets (mainly accounts receivable and office equipment) less the liabilities have a fair market value of $ 150,000, as established by an independent evaluator. RWC has never been audited and its year- end is November 30.
Floral Impressions Ltd.
Non- Consolidated Statement of Financial Position
(In thousands of dollars) 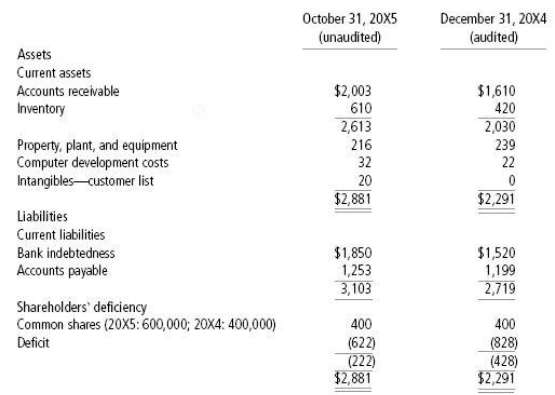 Exhibit E Notes from Domenic Jones€™ Conversation with Liz Holtby
Liz believes the acquisition of RWC provides an opportunity to expand into a less cyclical market and to sell on the internet. RWC has well established relationships with two major funeral home chains. Liz is excited about benefiting from RWC€™s website because the site fits perfectly with FIL€™s new direction and allows FIL to gain access to the internet immediately. So far, the site has not generated significant new business for FIL, but Liz is confident that, with time, sales will increase. As soon as RWC€™s billing system allows payments by credit card, FIL also intends to link directly into RWC€™s accounting system to invoice its own clients. Liz anticipates that RWC will account for about 40% of FIL€™s consolidated revenue this year. Liz plans to exercise her stock options and sell the shares acquired as soon as the share price reaches $ 9 or more.
To gain greater exposure on the internet, FIL is also developing its own website. FIL will pay for the costs of running the site by selling advertising spots on the site to home decorating companies. Liz believes she can generate $ 80,000 in advertising revenue over a 12- month period once the site is up and running. So far, FIL has pre- sold 10 spots for $ 200 each. The advertisements are to run for one month. Unfortunately, the site delays have caused some advertisers to cancel their contracts. Others are threatening to cancel their contracts unless FIL gets the site up and running within the next month. The controller has recorded the advertising revenue as sales.
FIL has two technicians working in its computer department. Most of their time is spent keeping the net-work up and running. Since an intranet was developed two months ago to give all employees access to the internet, the network has been bombarded with junk mail and has slowed down or crashed regularly. As a result, the two technicians have not had time to develop the website or to upgrade the firewall as planned. Liz wants the website up and running right away and has threatened to hire RWC€™s programmers to develop the website if FIL€™s technicians don€™t do it quickly enough.
Very recently, Liz spoke to a representative from a company offering to perform all of FIL€™s accounting over the internet. Now Liz€™s vision for FIL is to do everything on the internet. The representative says that a company will maintain, on its own website, the latest version of whatever standard accounting package FIL uses. FIL would access the site and post the transactions (accounts receivable, accounts payable, and payroll). His company would generate the accounting books and records and would generate FIL€™s monthly financial statements. Liz likes the plan because she could reduce both administrative staffing costs and the amount of time she spends managing the administration group. It would allow Liz to better focus her efforts on developing FIL€™s internet site and related sales.
Exhibit F Notes from Domenic Jones€™ Conversation with Craig Albertson
Craig Albertson was hired by FIL in September 20X5 as the controller. FIL€™s previous controller resigned in June 20X5 due to illness and the position was temporarily filled by the accounts payable clerk. Craig anticipates that he will have all year-end information ready for our audit team by March 15, 20X6.
In February 20X5, Liz outsourced FIL€™s payroll function to a service bureau that offered an exceptional price if FIL signed a five- year contract. The payroll consists of 50 employees. Craig has heard rumours that the service bureau is experiencing financial difficulties.
Historically, FIL€™s sales are highest during February and March, and August to October. Accounts receivable consist of a large number of small dollar value accounts, with the exception of five large chain store customers that account for approximately 40% of the total accounts receivable. The allowance returns typically have been 1% of fourth- quarter sales.
Management counts inventory at the end of each quarter and cost of goods sold is adjusted accordingly. At September 30, 20X5, the inventories held at each location were as follows: 55% of the total dollar value in British Columbia, 35% in Alberta, and 10% in Ontario. By year- end Craig expects inventory at all sites to be at much lower levels. While visiting the warehouse, I observed that the physical security over inventory was tight. Craig commented that FIL has never written down inventory in the past and that he estimates about 2% of the current inventory is obsolete because it is out of style.
During the year, management negotiated an operating line of credit with a new financial institution. The amount authorized is limited to 75% of accounts receivable under 90 days old and 50% of inventory, to a maximum of $ 2 million. The loans bear interest at prime plus 3%. Under this agreement, FIL is required to provide audited financial statements within 90 days of the fiscal year-end.
Craig did not record the investment in RWC, since the only change was in the number of common shares issued.
On October 1, 20X5, FIL purchased a customer list for $ 20,000 from a former competitor that was going out of business. FIL has not yet determined an amortization policy for this purchase.
Some employees and board members have questioned FIL€™s sudden focus on the internet when other companies seem to be moving away from it and back to traditional sales methods. Craig raised the same concern. He doesn€™t understand why FIL is changing direction when the new management€™s marketing changes produced such good results in20X4.

Financial Statements
Financial statements are the standardized formats to present the financial information related to a business or an organization for its users. Financial statements contain the historical information as well as current period’s financial... Corporation
A Corporation is a legal form of business that is separate from its owner. In other words, a corporation is a business or organization formed by a group of people, and its right and liabilities separate from those of the individuals involved. It may... Line of Credit
A line of credit (LOC) is a preset borrowing limit that can be used at any time. The borrower can take money out as needed until the limit is reached, and as money is repaid, it can be borrowed again in the case of an open line of credit. A LOC is...
Transcribed Image Text:

Q:
The following account balances are shown on November 30, 1999, for the
Q:
The ZooZoo company has decided to do some cost-cutting in the company
Q:
You, CA, are the senior in charge of an audit of Proctor
Q:
On December 30, 20X5, the statements of financial position of the Perk
Q:
A probability value p is often reported as an odds ratio, which