You, CA, are the audit senior of Ball Construction Corporation (BC), a small public company. It is September 19, 2013, and the year-end audit fieldwork has just been completed. The audit partner, Reena Sidhu, phones to say, The client has requested we meet next Thursday to complete the audit so BC can provide financial statements to its bank. Based on

You, CA, are the audit senior of Ball Construction Corporation (BC), a small public company. It is September 19, 2013, and the year-end audit fieldwork has just been completed. The audit partner, Reena Sidhu, phones to say, "The client has requested we meet next Thursday to complete the audit so BC can provide financial statements to its bank. Based on our discussions, I'm comfortable with the amount of fieldwork performed, but I'd like to see the completed files. Please prepare a memo discussing the accounting issues I need to bring to the attention of management."

BC, a Canadian construction company, enters into construction contracts with individuals and developers and builds to their specifications. The company subcontracts some aspects of a project when required, but primarily uses its own labour force. It has 180 employees, many of whom are long-term employees. BC does not own or manage properties once they have been built.

The company recently opened a branch in the southwestern United States. Most of BC's management believed the com pany should jump into the U.S. market before a slowdown, so the expansion was approved without much discussion. Similar to its Canadian operations, BC enters into contracts in the United States, but instead of hiring employees, it subcontracts all the labour required for its U.S. projects.

In 2012, BC purchased a patented foundation process (classified on the statement of financial position as an intangible asset) designed to improve the durability of a building's foundation. The process has full regulatory approval in Canada and has been used successfully. Management saw the U.S. expansion as an opportunity to launch BC's patented foundation process outside of Canada by using it for the foundations of multi-unit housing projects. As part of obtaining regulatory approval for the process in the United States, an engineer inspected the design of BC's first planned multi-unit housing project to be built there. He expressed concerns regarding the quality of the foundation process in a letter sent to BC. To date in the United States, BC has only built single-unit projects that did not use the process.

This year, to enhance teamwork and effectiveness, the CEO introduced a program called "Walk a Mile in Your Co-worker's Shoes." Managers must spend one week per month in a different department manager's position to better understand the issues faced by other departments.

BC also implemented a non-interest-bearing employee housing loan program on February 1, 2013. Individual loans of up to $36,000 were offered to long-term employees to assist with housing needs, such as buying a new home or reducing an existing mortgage. The CFO considered the possibility of obtaining security for the loans, but thought that the paperwork would be too time-consuming.

Although BC's audit is recurring and we are familiar with its operations and systems, we determined that the audit risk for this year has increased from medium to high. There are three main reasons for the change:

1. Recent declines and significant instability in the U.S. housing market have created a high credit-risk situation.

2. BC's controller left in March 2013, and the position had not been filled by fiscal year end.

3. Even though BC enjoys a good relationship with its bank, the bank increased the interest rate on the company's operating line during the fiscal year, suggesting that it views BC as a higher risk than before.

The bank requires audited financial statements, and has now put the following covenants in place:

The operating line limit is 80% of trade accounts receivable, plus 50% of inventory, plus 30% of construction in progress.

The working capital ratio must be 1.35 or better.

The operating line and long-term debt are secured by a general security agreement over BC's assets.

BC FINANCIAL STATEMENTS AS PREPARED BY MANAGEMENT

(in thousands of dollars) 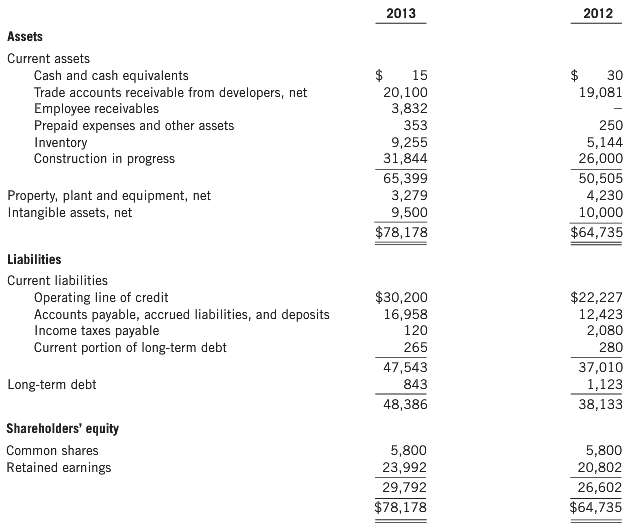 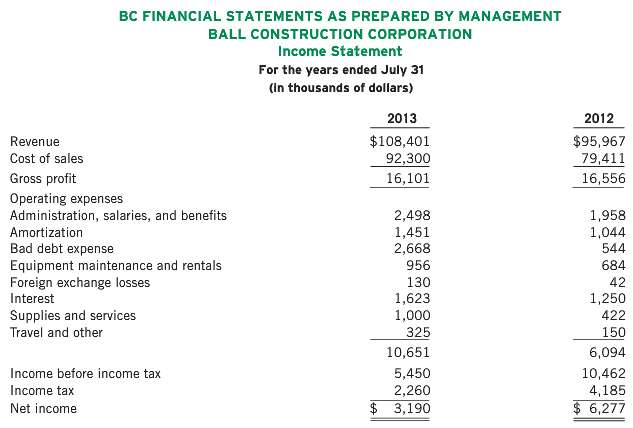 EXHIBIT C7-2(c)
ITEMS OF NOTE FROM THE AUDIT FILE
1. Internal Control
(a) When the controller left, the finance department staff took on additional duties, and often ended up working overtime. We noted that during the latter part of the year, the same individual was creating purchase orders, entering invoices into the system, and preparing the cheque runs. The CFO said the situation was unavoidable, and noted that the accounting manager reviewed the cheque runs and prepared the bank reconciliations.
(b) We noted that many journal entries had not been approved. The CFO said that he trained most of the employees responsible for the entries, so he knows what the entries are for. He also said, "Our management review of reports and financial statements would uncover any incorrect entries."
(c) The CFO relies on senior management to review, approve, and sign reports generated by the finance department, such as the "Costing Report by Project." Testing of a sample of reports indicated that most reports had been appropriately approved.
However, some reports were found on a construction manager's desk. When asked about them, she explained, "I'm so busy managing the jobs that I have and 'walking in someone else's shoes' that I haven't had time yet to look them over." The signed reports were provided to the audit team the next day and the audit testing was completed.
2. Analytical Review
We noted a decline in gross profit from 17% to 15%. Salaries and most operating expenses increased from the prior year. Bad debt expense increased almost 500% over 2007. According to the CFO, these trends are related to the U.S. contracts, which have lower margins. Expanding to the United States also contributed to the increase in operating costs. In addition, the U.S. economy deteriorated during the year, resulting in an increase in the number of customer accounts written off. We believe the explanations are satisfactory because they are consistent with other audit findings.
Inventory increased because BC anticipated a large increase in the cost of some of the materials used in the foundation process, and purchased $1.25 million of foundation materials before year end. This extra inventory was stored on the site of the multi-unit housing project in the United States. When asked about the risk of the materials not being usable due to the problems with receiving U.S. regulatory approval, the CFO responded that the material would eventually be used: "There's about a 50/50 chance that the process will be approved for use in the U.S. If it is not approved, we could ship the material back to Canada and use it here."
Another reason for the increase in total inventory is an error made by a construction manager who was "walking a mile" in the purchasing manager's shoes. He incorrectly authorized the purchase of $900,000 of construction project materials as a result of misunderstanding a submitted purchase request. To make matters worse, the price of these particular construction project materials has recently declined 25% due to increased overseas competition.
3. Accounts Receivable and Allowance for Doubtful Accounts
We sent confirmations to a sample of accounts receivable and noted two issues based on responses received:
(a) One confirmation was returned stating that a receivable balance, related to a $1,542,000 contract, was overstated based on the progress report. Upon examination of the relevant report, we noted that a transposition error had occurred (86% completion was used when it should have been 68%). The CFO agreed that it was an error, but was satisfied that this was an isolated issue and would have normally been caught by the supervisor's review. The CFO does not want to adjust for this error.
(b) Even though the company's policy is to translate foreign currency receivables at the year-end rate, we noted that the U.S. subledger had not been translated. The entire U.S. receivable amount related to one contract, which was progress-billed U.S.
$601,055 when the exchange rate was C$1.103 for each U.S. dollar. The year-end rate of exchange was C$1.045 for each U.S. dollar. When the oversight was brought to the attention of the assistant responsible for the U.S. subledger, she immediately asked the CFO if she should make the adjustment. He replied that she couldn't book it because he had already closed the subledger for the year.
4. Employee Housing Loans
We examined a standard loan agreement, and the terms of the loan stipulate repayment in yearly installments over a 15-year period. As at July 31, 2013, 110 employees had received loans. Testing has proven the validity of the amounts shown on the balance sheet, except for an outstanding loan due from a recently retired employee. The CFO explained, "The total amount of these loans should be shown as current on the balance sheet because they are demand loans. As for the retiree, I know that we'll get the $35,400 out of him sooner or later." Further examination of the agreement indicates that the loan becomes pay able on demand once the employee leaves the company. As of the close of fieldwork, the retiree has not repaid his loan. Audit work indicates that a taxable benefit has been appropriately recorded on the employees' T-4 slips.
5. Inventory
We noted discrepancies when test-counting inventory. When we discussed them with the CFO, he said, "Most employees are reluctant to complete a materials sign-out sheet. They claim they are too busy. I'm confident, though, that the proper materials get charged to the right project because the construction managers must account for project inventory usage at our monthly inventory count. They make a big fuss about how much work it is, but they always manage to account for all the used items." The audit file noted that all the discrepancies were accounted for, and adjustments to the accounting records had been appropriately made.

Balance Sheet
Balance sheet is a statement of the financial position of a business that list all the assets, liabilities, and owner’s equity and shareholder’s equity at a particular point of time. A balance sheet is also called as a “statement of financial... Exchange Rate
The value of one currency for the purpose of conversion to another. Exchange Rate means on any day, for purposes of determining the Dollar Equivalent of any currency other than Dollars, the rate at which such currency may be exchanged into Dollars...
Transcribed Image Text:

To: Reena Sidhu From: CA I have reviewed the audit file of Ball Construction Corporation (BC) and have the document requested which discusses the accounting issues to be brought to the attention of ma…View the full answer

Q:
You are the audit senior of Ball Construction Corporation (BC), a small
Q:
Describe how the IRS verifies tax returns at its service centers.
Q:
Do you think Airbus’s more passenger-friendly planes gave it a significant competitive
Q:
Which of the following statements are true?(a) Both nitrogen and phosphorus can
Q:
Assume you are the division controller for Auntie M’s Cookie Company. Auntie
Q:
QUESTION 23 Which of the following is true of running a Spark
Q:
A company has already spent $5,000 to harvest tomatoes. The tomatoes can
Q:
Sasha Inc. (SI) is a public company located in Canada that operates
Q:
You, CA, an audit senior at Grey & Co., Chartered Accountants, are
Q:
Prepare general journal entries for the following transactions of a new company