Giant acquired all of Small’s common stock on January 1,

Giant acquired all of Small€™s common stock on January 1, 2009. Over the next few years, Giant applied the equity method to the recording of this investment. At the date of the original acquisition, $90,000 of the fair-value price was attributed to undervalued land while $50,000 was assigned to equipment having a 10-year life. The remaining $60,000 unallocated portion of the acquisition-date excess fair value over book value was viewed as goodwill.
Following are individual financial statements for the year ending December 31, 2013. On that date, Small owes Giant $10,000. Credits are indicated by parentheses.
a. How was the $135,000 Equity in Income of Small balance computed?
b. Without preparing a worksheet or consolidation entries, determine and explain the totals to be reported by this business combination for the year ending December 31, 2013. 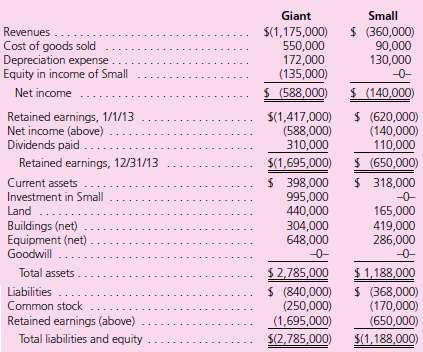 c. Verify the figures determined in part (b) by producing a consolidation worksheet for Giant and Small for the year ending December 31, 2013.
d. If Giant determined that the entire amount of goodwill from its investment in Small was impaired in 2013, how would the parent€™s accounts reflect the impairment loss? How would the worksheet process change? What impact does an impairment loss have on consolidated financialstatements?

Goodwill
Goodwill is an important concept and terminology in accounting which means good reputation. The word goodwill is used at various places in accounting but it is recognized only at the time of a business combination. There are generally two types of... Financial Statements
Financial statements are the standardized formats to present the financial information related to a business or an organization for its users. Financial statements contain the historical information as well as current period’s financial... Common Stock
Common stock is an equity component that represents the worth of stock owned by the shareholders of the company. The common stock represents the par value of the shares outstanding at a balance sheet date. Public companies can trade their stocks on...
Transcribed Image Text:

Q:
Giant acquired all of Smallâ€™s common stock on January 1, 2011. Over
Q:
Giant acquired all of Small\'s common stock on January 1, 2014, in
Q:
Consider a unity feedback system with a loop transfer function (a) Find
Q:
What measures may be taken to reduce the likelihood of thermal shock
Q:
(a) Write a program that gives and graphs partial sums of (15).
Q:
You are offered two stocks. The beta of A is 1.4 while

Q:
Apply the Gibbs phase rule and obtain the number of degree of
Q:
On January 4, 2017, Macy’s Inc., faced with declining revenues and profits
Q:
Following are separate financial statements of Michael Company and Aaron Company as
Q:
Following are selected accounts for Mergaronite Company and Hill, Inc., as of
Q:
Income recognition for various types of business. Most business firms recognize revenues