Pam Corporation acquired an 85 percent interest in Sun Corporation on August 1, 2016, for $522,750, equal to 85 percent of the underlying equity of Sun on that date.

On September 30, 2016, Pam sold an inventory item (equipment) to Sun for $50,000 at a gross profit to Pam of $10,000. When this equipment was placed in service by Sun, it had a five-year remaining useful life and no expected salvage value.

Sun's dividends were declared in equal amounts on June 15 and December 15, and its income was earned in relatively equal amounts throughout each quarter of the year. Pam applies the equity method, such that its net income is equal to the controlling share of consolidated net income. Financial statements for Pam and Sun are as follows (in thousands): 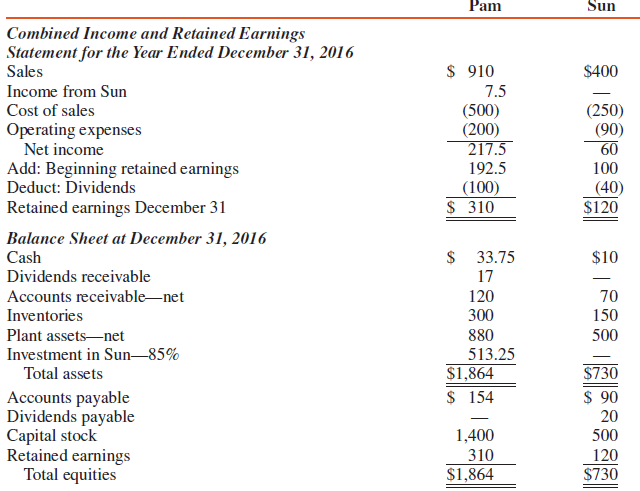 REQUIRED:
Prepare a consolidation workpaper for the year ended December 31, 2016.

Financial Statements
Financial statements are the standardized formats to present the financial information related to a business or an organization for its users. Financial statements contain the historical information as well as current period’s financial... Salvage Value
Salvage value is the estimated book value of an asset after depreciation is complete, based on what a company expects to receive in exchange for the asset at the end of its useful life. As such, an asset’s estimated salvage value is an important... Corporation
A Corporation is a legal form of business that is separate from its owner. In other words, a corporation is a business or organization formed by a group of people, and its right and liabilities separate from those of the individuals involved. It may...
Transcribed Image Text:

Get help from Cost Accounting Tutors

Q:
(c) (i) Define what it means for a function F: [a, b]
Q:
Leisa Reed and Randell Thurman lived together in Spring City, Tennessee. Randell
Q:
Pop Corporation acquired a 70 percent interest in Son Corporation on January
Q:
Comparative consolidated financial statements for Pop Corporation and its subsidiary, Son Corporation,
Q:
A sample containing 33.42 g of metal pellets is poured into a