A horizontal chemical vapor deposition (CVD) reactor for growth of

A horizontal chemical vapor deposition (CVD) reactor for growth of gallium arsenide (GaAs) thin films is shown in the figure. In this process, arsine (AsH3), trimethyl gallium, Ga(CH3)3, and H2gases are fed into the reactor. Inside the reactor, the silicon wafer rests on a heated plate. The reactant gases flow parallel to the surface of the wafer and deposit a GaAs thin film according to the simplified CVD reactions:

If the process is considerably diluted in H2 gas, then the mass transfer of each species in the H2 carrier gas can be treated separately. The surface reaction is very rapid, and so the mass transfer of the gaseous reactants to the surface of the wafer limits the rate of GaAs thin film formation. In the present process, the edge of a 10.0 cm silicon wafer is positioned 4.0 cm downstream of the leading edge of the susceptor plate. The wafer is inset within this plate so that a contiguous flat surface is maintained.

The process temperature is 800 K, and the total system pressure 101.3 kPa (1.0 atm). Consider a limiting case where the flow rate of the H2-rich feed gas to the reactor results in a bulk linear velocity of 100 cm/s, where trimethylgallium is present in dilute concentration. Determine the local mass-transfer coefficient (kc) for trimethylgallium in H2 gas at the center of the wafer using boundary-layer theory. The binary gas-phase diffusion coefficient of trimethylgallium in H2 is 1.55 cm2/s at 800 K and 1.0 atm. 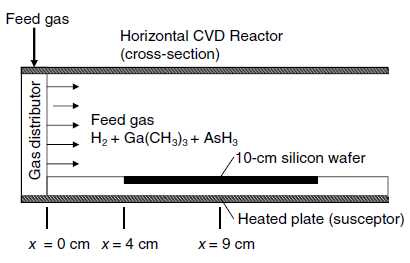 Let A …View the full answer

Get help from Physics Tutors

Solution for problems in chapter 30

Q:
A horizontal chemical vapor deposition (CVD) reactor similar to the configuration shown
Q:
The chemical vapor deposition of silane vapor (SiH 4 ) forms a
Q:
When you use the two-standard-deviations F-test, what assumption must be met by
Q:
The use of topical painkiller ointment or gel rather than pills for
Q:
The process of matching a method call with the correct method is
Q:
As a new intern for the local branch office of a national

Q:
Dwight transferred assets that had appreciated in value to Dunder-Mifflin Partnership in
Q:
In the course of the audit of Brand Drug Limited (BDL), the
Q:
A spherical pellet containing pure solid A is suspended in a flowing
Q:
A pond containing a suspension of microorganisms is used to biologically degrade
Q:
A wooden beam is 3.30 m long and has its center of