1. a. How much did the materials cost per unit change between June and July?

b. How much did the conversion cost per unit change between June and July?

2. Which is the optimal choice of material and factory overhead costs in August? Why?

3. On a FIFO basis, what are the percent changes in the cost per completed unit from one group to the next over the three-month period? What may have caused these differences?

4. How should William respond to Mr. Fantastic’s call to “Show me the money!” in terms of options to reduce production costs over time to increase profitability?

5. If the estimate for projected production in August is adjusted down by 20% due to inclement weather, yet total labor and factory overhead costs remain at the original amounts, what is the impact on cost per equivalent unit?

7. How successful was William in reducing unit costs after the first month?

8. How does knowing the cost of the units produced over three months help managerial decision making?

9. Was this spreadsheet effective in addressing Mike’s concerns that William would be able to determine the cost for each unit in each of three months, explain how one period’s production data feeds into the next in a continuous flow, and analyze the progress of the business over time? Why or why not?

10. Was accepting the licensing requirement as part of the Spark Bank financing deal a good idea? What are the positive and negative aspects of doing so? 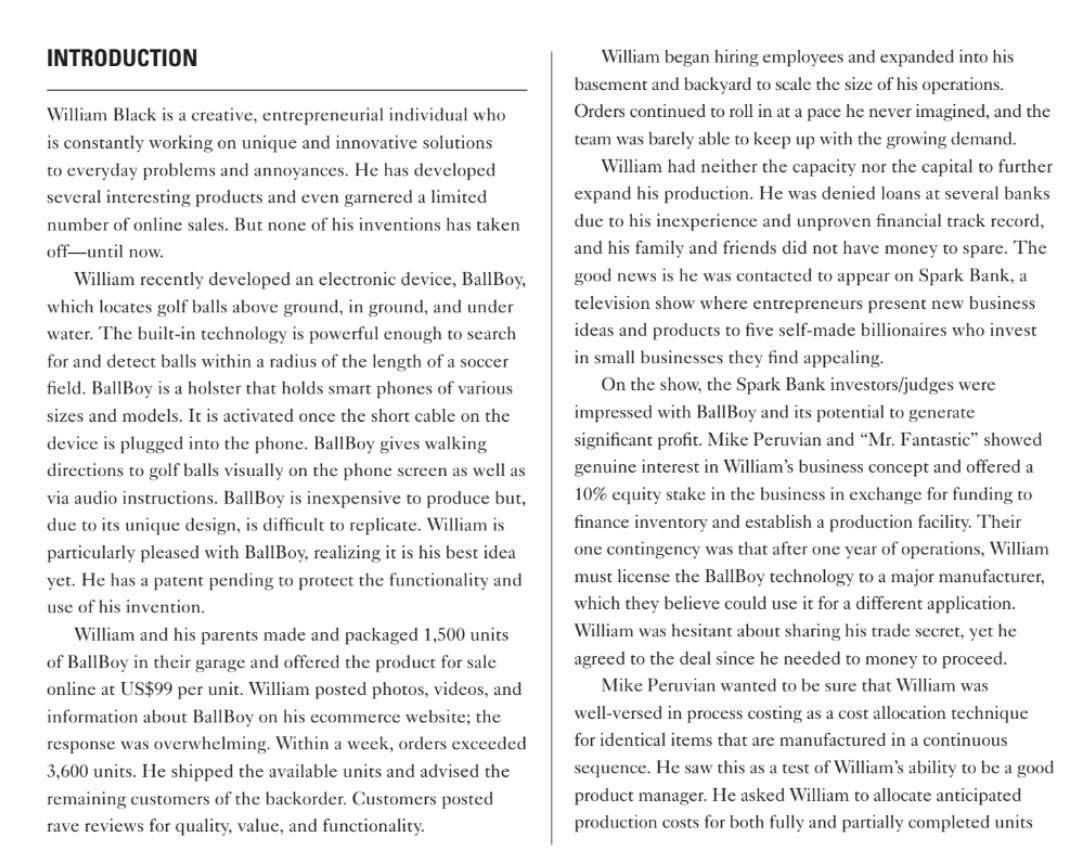 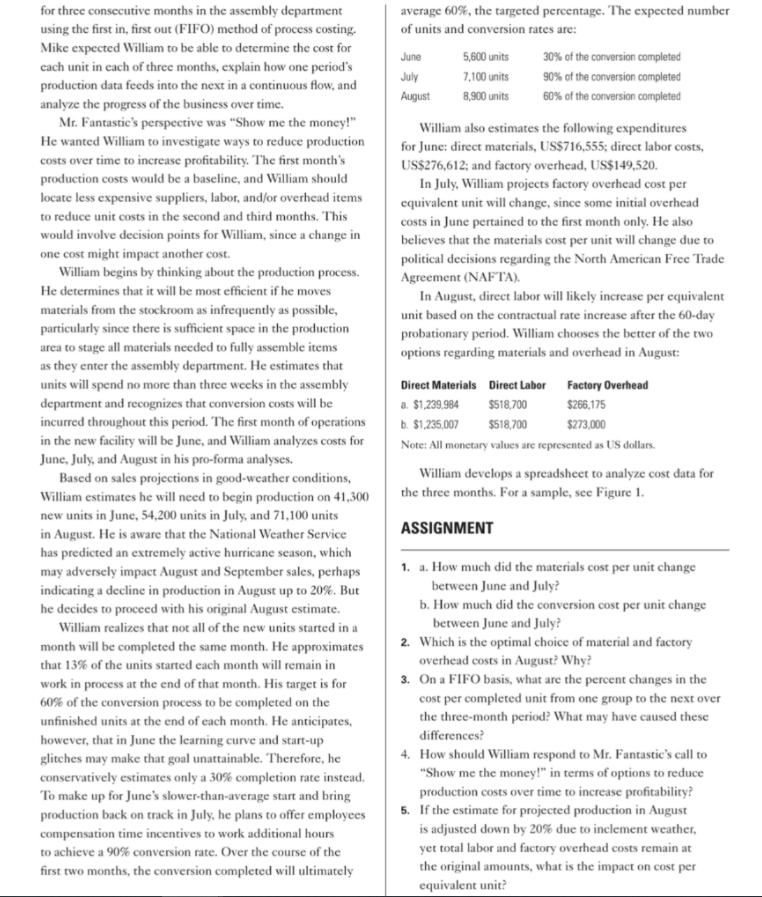 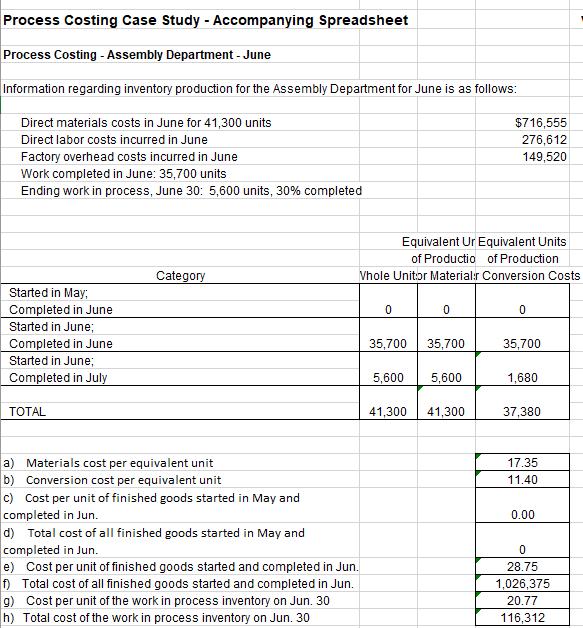 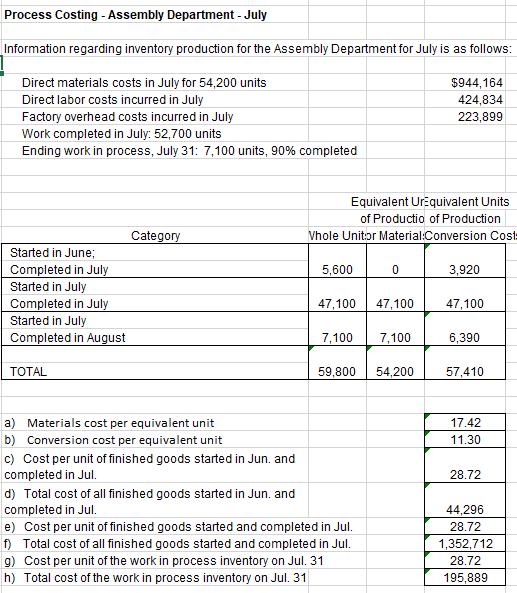 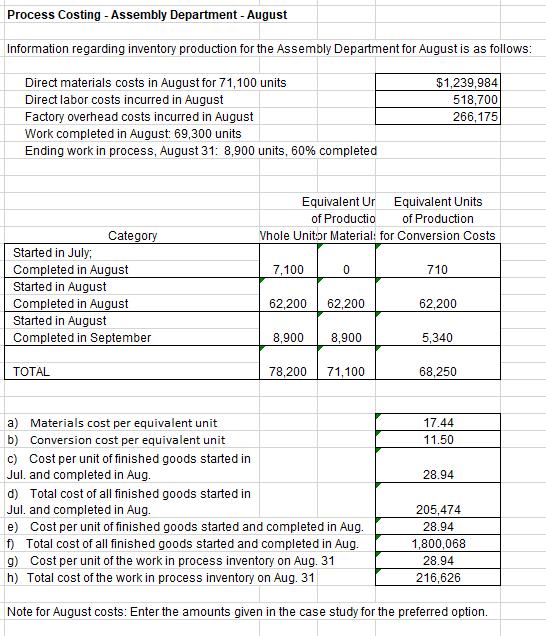 
INTRODUCTION William Black is a creative, entrepreneurial individual who is constantly working on unique and innovative solutions to everyday problems and annoyances. He has developed several interesting products and even garnered a limited number of online sales. But none of his inventions has taken off-until now. William recently developed an electronic device, BallBoy, which locates golf balls above ground, in ground, and under water. The built-in technology is powerful enough to search for and detect balls within a radius of the length of a soccer field. BallBoy is a holster that holds smart phones of various sizes and models. It is activated once the short cable on the device is plugged into the phone. BallBoy gives walking directions to golf balls visually on the phone screen as well as via audio instructions. BallBoy is inexpensive to produce but, due to its unique design, is difficult to replicate. William is particularly pleased with BallBoy, realizing it is his best idea yet. He has a patent pending to protect the functionality and use of his invention. William and his parents made and packaged 1,500 units of BallBoy in their garage and offered the product for sale online at US$99 per unit. William posted photos, videos, and information about BallBoy on his ecommerce website; the response was overwhelming. Within a week, orders exceeded 3,600 units. He shipped the available units and advised the remaining customers of the backorder. Customers posted rave reviews for quality, value, and functionality. William began hiring employees and expanded into his basement and backyard to scale the size of his operations. Orders continued to roll in at a pace he never imagined, and the team was barely able to keep up with the growing demand. William had neither the capacity nor the capital to further expand his production. He was denied loans at several banks due to his inexperience and unproven financial track record, and his family and friends did not have money to spare. The good news is he was contacted to appear on Spark Bank, a television show where entrepreneurs present new business ideas and products to five self-made billionaires who invest in small businesses they find appealing. On the show, the Spark Bank investors/judges were impressed with BallBoy and its potential to generate significant profit. Mike Peruvian and "Mr. Fantastic" showed genuine interest in William's business concept and offered a 10% equity stake in the business in exchange for funding to finance inventory and establish a production facility. Their one contingency was that after one year of operations, William must license the BallBoy technology to a major manufacturer, which they believe could use it for a different application. William was hesitant about sharing his trade secret, yet he agreed to the deal since he needed to money to proceed. Mike Peruvian wanted to be sure that William was well-versed in process costing as a cost allocation technique for identical items that are manufactured in a continuous sequence. He saw this as a test of William's ability to be a good product manager. He asked William to allocate anticipated production costs for both fully and partially completed units

66 1. a. How much did the materials cost per unit change between June and July? 67 68 Change in Ma… View the full answer